Disclaimer: Opinions in this blog are The Jira Guy’s – and in no way represent the feelings of Coyote Creek Consulting.

Well, here we are! After a relatively short beta, Jira Work Management is now live and ready to be used by anyone on Jira Cloud. For those who didn’t read my last article on the JWM Beta, this is meant to be a replacement for Jira Core and address some of the issues that wider business teams have when adapting Jira for their use.

Take that as you will, but I have nothing but praise for Atlassian for the entire process. They allowed me to give my honest feedback and didn’t flinch at criticisms – which I have plenty of criticism for Jira.

So let’s take a deep dive into Jira Work Management, what’s changed since our last look at it, and what the plans are for its future!

Jira Core doesn’t stand out among the other Jira offerings. Let’s get that out of the way. They are so-called business projects, but they required so much customization that with all the work I’d have to do, I might as well start with a JSM or Jira Software project and give my users those extra features. Hence this picture from my previous article.

Now, Jira Work Management’s solution to this is two-fold. First is to give the Business Projects some of those extra features. We’ll talk about those in a moment. 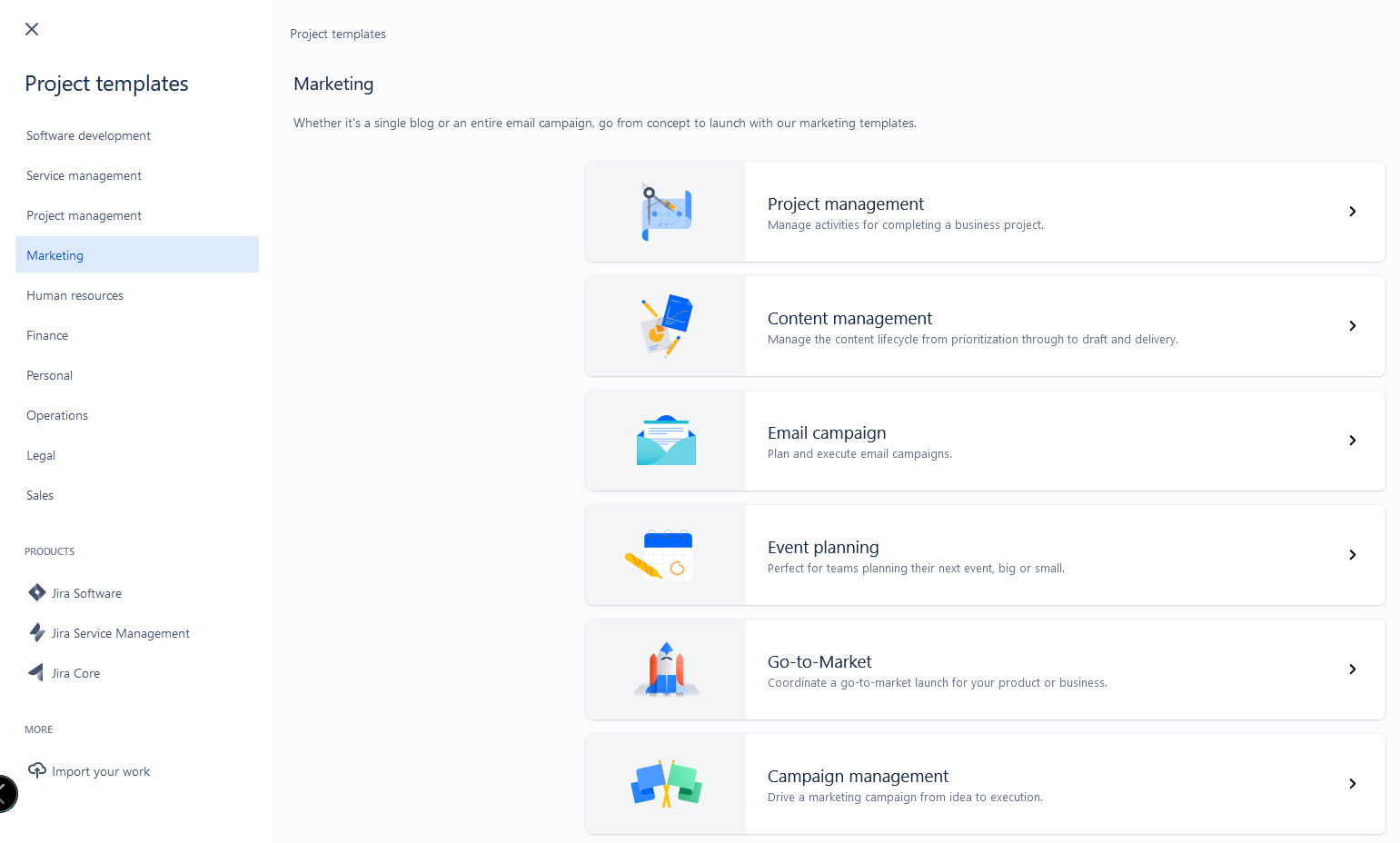 The second, most exciting thing they are doing is giving us customizable Templates as a way to start our business projects. This way, we are not starting from point 0 when we are trying to onboard a Legal Team, or HR, or any of the other myriad of teams within a given organization.

I am honestly most happy to see and finally talk about this feature with you. When I first spoke to Atlassian about how they can improve Jira for Business teams, I may have gone on a 15-minute rant about how much work onboarding a new business team can be…oops.

As for what templates are available…well. There are 23 currently available, broken down into Project Management, Marketing, Human Resources, Finance, Personal, Operations, Legal, and Sales. Some of my favorites are Content Management (Marketing), New Employee Onboarding (HR), Personal Task Tracking (Personal), Procurement (Operations), and Sales Pipeline (Sales).

I was explicitly asked about Personal projects at one point during Jira Work Management’s development. I’ve always had a personal project in Jira, but given Jira’s habit of creating new schemes for everything, this wasn’t something I trusted many people with. But with templates now a thing, I think I could trust users to have personal projects for their task tracking. In speaking of which.

One factor I stressed during the feedback is that a Jira Admin is a very busy person at the best of times. So anything we can do to make a Jira Admin’s Life easier is always appreciated. The team took that to heart and included that feedback in everything.

However, they also included that in other places. Under certain circumstances, your users can deploy templates to your Jira instance to stand up their projects in a self-service manner. I should mention, this is not the same functionality as Team-Managed projects from Jira Cloud. Let me explain.

First, teams will only be allowed to deploy preset templates. If you have customized any templates in your instance, those customizations will be present, but Users will not be able to change those projects or templates further without your help (and knowledge).

Currently, this feature is only available if you have a Jira Cloud instance with only JWM. If you have Jira Software or Service Desk on your instance, this self-service model isn’t available yet, though the team assures me they are working on it.

Timeline for JWM Projects have had a significant overhaul since the Beta launch and have the most to talk about. The first thing to note – that, unlike Advanced Roadmaps, each bar’s color is representative of the status category – gray for “To-Do,” blue for “In Progress,” and Green for “Completed.” As you can also see, you can specify a “Start” and “End” time for each item and see who’s responsible for that item.

If you need to report this Timeline to someone not in Jira or an Audience to explain the differences, you can export the entire thing as an image to throw into an email or Confluence page. Which I’ll admit…is very nice.

However, the team is far from done with Timeline. For one thing, having a status category color is nice, but the team intends to include the actual status on the bar eventually. This feature will be nice for teams with multiple “In Progress” statuses, which, to be fair, is most teams!

Another thing they intend to add is Hierarchy. Right now, everything is flat, with Epics, Subtasks, and Tasks all being on the same level. However, this is not how people work, and Atlassian wants to reflect that by allowing things to stack up as they would naturally – Subtasks to Tasks, Tasks to Epics.

The last thing they have told me they are working on is Inline creation, which creates issues between two other existing issues on the Timeline. Right now, you have to create an issue at the bottom and then move it where you want. Yeah, it’s a minor feature, but a victory nonetheless.

Lists are another facet of Jira Work Management to get a good bit of attention since the Beta. For example, you can now add and edit some custom fields in line without jumping to the issue to edit them. This is big as custom fields are one of Jira’s prominent features, so having them be a part of your list can be critical for some workflows. While it is true they don’t support every custom field right away; they do have all the main custom field types already supported and plan to keep adding more and more niche types as time goes on.

Another area of lists to get some attention is filtering. They’ve added some buttons to the top of the list that behaves like quick filters in Jira Software. That is, you click them, and they apply some condition onto the data you are seeing. While they are only preset options for now, the team tells me they plan to add more of these “preset” buttons to give you more flexibility within the next few weeks – with the eventual goal being to get to full JQL Filtering on the lists.

Look, Jira Cloud has a reputation for being slow. You know it, you’ve let me know it, and in turn, I’ve told Atlassian that. Yes, I went there.

So I’m happy to say that Jira Work Management feels pretty snappy from what I could see. JWM was demoed to me on a relatively large instance, but the pages still loaded up relatively quickly – even when filtering issues. Even during my own experiences, it wasn’t easy to get a page to take longer than a second to load – and that was while intentionally stressing things.